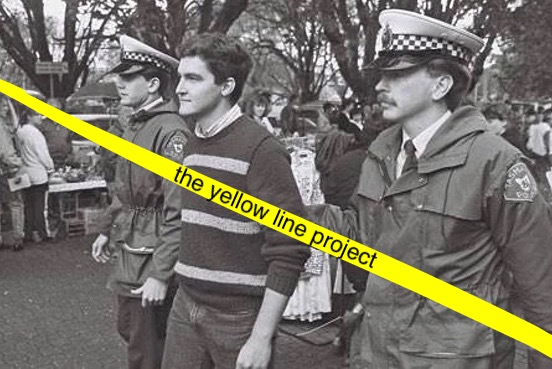 Playwriting Australia have announced the recipients of their Duologue programme, designed to support creative collaborations on new Australian work.

Playwright Campion Decent and I have been selected and will be working together on developing the script for The Yellow Line Project.

More about our project below:

“History is only a name for our collective actions as individuals.” Rodney Croome, 2015

Based on true events, The Yellow Line Project investigates the twenty-year journey towards the decriminalisation of homosexuality in Tasmania.

In October 1988 Hobart City Council banned a stall at the Salamanca Market, which had been set up with a petition calling for homosexuality to be decriminalised. According to the then Tasmanian Criminal Code, consenting, sexually active gay adults faced up to 21 years in jail if convicted. The Council, with support from the State Government, ordered the arrest of anyone defying the ban, arguing that there was no place for this kind of stall at a “family” market, painting a yellow line across the road delineating a “no go zone” for any of the stall’s supporters or volunteers.

In defiance of this ban, hundreds of people turned up to support the stall and over the following seven weeks 130 arrests were made, making it the largest act of gay rights civil disobedience in Australia’s history.

Politicised by these events, a young gay couple handed themselves in to police stating their relationship placed them in breach of the Criminal Code. Their actions began a decades-long fight that went from the streets of Hobart to the High Court of Australia and the United Nations.

This remarkable story has become a touchstone for human rights violations worldwide and is regularly cited in international human rights cases, yet, outside Tasmania and perhaps the older LGBTI community, it remains a little known victory. The project is an examination of peaceful grassroots activism that effected significant societal change, and will be developed with unprecedented access to and support from the many people who were directly involved in the events.

The Yellow Line Project presents the personal stories behind the public events, and retells the story of a community’s power and tenacity.